Today I have Author Michael J. Lee stopping by on
his tour for My Frankenstein.
1. Who is Michael J Lee?
I’m a writer, consultant, blogger, gourmet, movie nut, history buff. Though if you really want to know who I am buy a copy on Amazon (grins) Seriously though I believe to write a good story is to tell people who you really are. You put a piece of yourself into your work. The pieces of that I put in into My Frankenstein were obviously my love of classic horror tales and movies but also my generosity. That’s what turned it from a horror story into a paranormal romance as you’ll see in the next answer.
2. Where did you get your inspiration from for My Frankenstein?
Initially it began as just another Frankenstein variant, something that Hammer might have produced back in the day. It started as a screenplay. But before I even wrote the first words it changed considerably. It changed because in order for that idea to really come to life I had to be more generous with my characters. I had to give them more emotional depth and they had to have very strong relationships with each other. That’s when it really came alive. And those relationships just took the story naturally into the realm of Paranormal Romance. It’s a little ironic because in the story Viktor bestows life on his creation but he isn’t very generous with it.
3. Do you ever have to struggle with your characters at any point to get them where you want them to go?
If I’m really struggling with my characters it’s usually because they want to go someplace even more amazing than what I had originally intended. That’s an excellent place to be in the creative sense. Your characters are so developed they have wills of their own. When that happens the best thing to do is let them take the reigns!
4. Do you ever have problems with writers block?  If so how do you get through it?
I suffer writer’s block in two ways, during the concept phase and during the execution. If I’m blocking during the concept phase it’s usually because the concept isn’t working. It may sound cool but I haven’t really gotten into its beating heart. If I’ve really got the concept, the story should just be flowing out of me. It should be taking me down corridors I didn’t even consider. Then it comes time to turn this into a real story, the execution phase. Now I rarely get stuck during the execution. That’s because I just write what is coming to me, whether that’s the beginning, the middle, or the ending. But it’s just getting started sometimes that’s the drag. Especially if this is in the beginning or the middle and the end isn’t clearly in sight. The only way to get over that is to just jump in and write. Just like the water is only cold until you jump in, the blank page only deters you until you start writing.
5. While working on a story, do you directly onto the computer or are there notebooks and plot ideas jotted down in various places?
A little bit from column A ,a little from column B. When I’m in the concept stage I write down stuff in notebooks. Usually it’s just a few notes and character names. When I start on the manuscript I move to the computer. I write out everything I can think of creating a longer and longer treatment or synopsis. Slowly I fill in the details and dialogue until a synopsis morphs into a rough draft. From there I keep adding until I reach the point where it’s time to start taking stuff away.
6.  Do you have any future releases we should watch for?
Yes. My next book is From With Blood!
7.  What do you do when you’re not writing/editing or thinking about writing/editing?
Sleep. Eat. Stuff that would be crude to mention. Seriously my hobbies are cooking, history, movies, plus I like a good bar with a nice selection of alcoholic beverages.
Thanks for stopping by today, Michael!
Here's more about My Frankenstein and where you can find Michael. 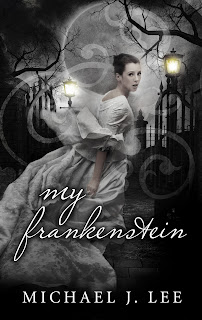 http://www.amazon.com/My-Frankenstein-ebook/dp/B004QOA2K4/ref=sr_1_1?ie=UTF8&qid=1302024702&sr=8-1
In a small village in early 19th Century young Eva is enthralled by the new young baron, Viktor Frankenstein.  Viktor promises to transform the traditional little town into a beacon of science and gives the book loving Eva access to his fantastic library. Eva becomes his student and assists him in a secret experiment, though she is kept in the dark about its ultimate aim. Soon after that Viktor introduces Eva to his “cousin” Adam. Adam is horribly disfigured with stitches running across his face. Viktor claims he is mute and simpleminded, but Eva takes pity on him and sets out to teach him to speak.…
What follows is a combination of tragic romance and classic horror as Eva is pulled between Viktor, who grows jealous and takes murderous steps to ensure his secret, and Adam, who possess tremendous strength and rage yet deep inside is innocent and vulnerable.
In his debut fantasy novel, Michael J. Lee retells the classic story by Mary Shelley as a dark romance with steampunk overtones.
http://www.thewrap.com/blog/michael-lee