Guest Author Sonya Clark and a chance to win!!

Today I have author Sonya Clark here on my blog
discussing the Uncooperative Bad Guy from her release
Mojo Queen.


There is also a chance to win a signed book or ebook - the
details will be at the bottom ;)

Thanks for stopping by, Sonya!!
The Uncooperative Bad Guy
By Sonya Clark
When I began writing Mojo Queen I had a pretty good grasp of my characters, or so I thought. There was Roxie Mathis, the main character. Roxie is a paranormal investigator who can see auras and spectral energy and uses that ability along with hoodoo folk magic to help people with their supernatural problems. Then there’s her wingman, Daniel Rambin. Daniel is her best friend and they tell people they’re cousins, when in fact Daniel is her ancestor (I had to have a vampire in there somewhere). I knew the case Roxie would be working on revolved around possession. A group of people performed a ritual that called forth an evil entity and allowed it to possess the body of one of their number. The group had to have a leader of course, the one guy who really knew what he was doing and how dangerous it would be, and who was probably not being honest with the rest of the group. That was my bad guy. Or in Whedon parlance, my Big Bad.
His name is Blake Harvill, and he is mad, bad, and dangerous to know. He is a sorcerer who practices chaos magic. Whereas most magical systems stick to certain guidelines, chaos magic can draw from any and every pantheon and practice. It’s all about intent, and Blake aims to misbehave (sorry, I just had to go there). Or does he? At first glance it might seem like he helped a demon cross into the mortal plane so he could have himself an evil playmate with which to create mayhem and, well, chaos. But what if there was more to it than that? What if he never meant for things to get out of control? What if underneath his arrogance, his sexy smirk, his dark chocolate eyes, and the starfield aura that Roxie finds so captivating – what if under all that is a man who is lonely and maybe a little desperate? What if all he really wants is someone he can be himself with?
Right now Daniel, who is a big fan of classic country music, is somewhere warbling “Looking For Love In All The Wrong Places” horribly out of tune.
The more Blake became a fully formed character to me, the more obvious it became that he was not the Big Bad after all. And the more Roxie got to know him, the more she wanted him, even if he was mad, bad, and dangerous to know. Blake may have been uncooperative when I tried to make him a bad guy, but once I realized he was really the love interest in the story there was no stopping him. Sometimes you have to let a character tell you who they are, instead of forcing them into a role. I’m glad I listened to Blake.
Here's more about Mojo Queen and Sonya Clark: 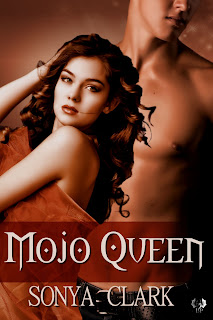 Blurb:
Hoodoo and high magic are on a collision course.
Roxanne Mathis isn't like everyone else. Not only can she see auras and spectral entities, she can mix herbs and roots for spells to do good or ill. She can even light a candle without the benefit of a match. But when she’s hired to exorcise a demon from a young girl, she discovers the limits of her powers.
With her vampire cousin at her side and a sexy sorcerer chasing her on the rebound, Roxie sets out to send that evil entity back to where she came from.
Nothing is as it seems and Roxie’s in over her head. It’s not going to be enough for her to just be a paranormal investigator and old school root worker – to defeat this demon, she’s going to have to be the Mojo Queen.
Buy Links
Direct from Lyrical Press:
http://www.lyricalpress.com/store/index.php?main_page=product_info&cPath=81&products_id=328
Amazon:
http://www.amazon.com/Mojo-Queen-ebook/dp/B004YXF0M2/ref=sr_1_3?ie=UTF8&m=AG56TWVU5XWC2&s=digital-text&qid=1304399499&sr=1-3
Barnes and Noble:
http://search.barnesandnoble.com/Mojo-Queen/Sonya-Clark/e/9781616502713/?itm=1&USRI=mojo+queen
Fictionwise:
http://www.fictionwise.com/ebooks/b123217/Mojo-Queen/Sonya-Clark/?si=0
Excerpt:
I sat in the chair opposite the loveseat, placing the candles on the coffee table. Glanced at him to make sure I still had his attention, which of course I did. One side of his mouth still curled up in a smirk, eyebrow quirked. I sat back, let myself sink into the comfy chair and relax as much as possible. First the candle on the left. Focusing on the wick, I visualized a tiny flame erupting from it--concentrating my will, pouring energy into my intention. I could feel myself sliding further into exhaustion as energy curled inside me, but after a long, agonizing moment the candle came to life. I let out a breath before I could stop myself, avoiding his gaze. I didn’t want him to know how much this was taking out of me, but I had a bad feeling it was obvious. I turned my attention to the other candle and though it took even longer this time, it too lit. I felt almost as bad as I had this afternoon.
Blake reached for a backpack on the floor I had not seen in the darkness. He opened it, fished something out, and tossed it to me. I didn’t so much catch it as let it fall in my lap. A chocolate candy bar.
It was my turn to quirk an eyebrow. Waving the bar at him I said, “What, is this to ward off dementors?”
The smirk became a genuine smile again briefly. “Something like that. You need to eat.”
I gave him a skeptical look.
“You know you’re using energy with that.” He gestured at the candles. “The energy needs to be replenished.”
I rolled my eyes but tore open the wrapper. The chocolate tasted, well, damn, like mainlining something illegal. Maybe he had a point. I was halfway through the bar when he spoke again, as if there had been no pause.
“Especially since you don’t really know what you’re doing yet.” Even in the low candlelight I had no trouble seeing the wicked amusement in his dark eyes.
I managed to finish chewing without choking, tossed the remainder of the candy bar on the coffee table and sat up straighter. “Why don’t you tell me why you’re here? Or better yet, tell me where I can find your demon lover? So I can send her back to Hell.”
“Well, actually, that’s exactly why I’m here, Roxanne.” Like we were discussing insurance or something. “I want you to find my demon lover.”
Gob-smacked, all I could manage was, “Huh?”
“And I want you to send her back to Hell.”
Author Bio:
Sonya Clark grew up an Army brat, living all across the United States as well as Japan and Germany by the time she graduated high school. Books were one of the few constants in her life. An eclectic reader, she always had a special love for the paranormal and is a lifelong fangirl of all things that go bump in the night.
A deep love of music is another constant thread in all of her fiction. She writes at a desk equipped with High John the Conqueror root and a mojo hand. She has worshipped at the mother church of country music, traveled the back roads of the blues highway, been to the crossroads at midnight, and though she’s never cooked up a mess of polk salad, she has been to Graceland four times.
She lives with her husband and Yorkie in Tennessee.
Author Links:
Blog/website: http://www.sonyaclark.net/
Twitter: http://twitter.com/#!/sonyabclark
Facebook: http://www.facebook.com/authorsonyaclark
Goodreads: http://www.goodreads.com/author/show/3510861.Sonya_Clark

Email ThisBlogThis!Share to TwitterShare to FacebookShare to Pinterest
Labels: Blog tour, Give away, guest stop