I asked a fellow author from Class Act Books to be on
my blog today.  I loved her book, it had that element of
surprise all through it.  If there's one thing that wow's me
in a book it's me not being able to see where it's going!


Jacquelyn Castle's The Dragonfly Prophecy is a definite
must read to be added to everyone's TBR pile. 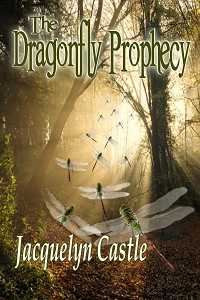 1. In five words describe Jacquelyn Castle.
Passionate, dedicated, creative, mystical, fun.
2. After reading Dragonfly Prophecy - which hooked me on page one - I have to know, do you have sequels planned?
Absolutely!  There are 3 books planned and book 2 is almost finished!  I know how it will end, and believe me; it's not what you'd expect!
3. What is your favorite scene in Dragonfly Prophecy?  Why?
My favorite is the fight scene.  I tried to convey that Lexi had the power to help herself and her friends all along, even though she was quite insecure about herself.  I think everyone has some level of insecurity about who we are and what we're capable of.  It was fun to write about Lexi overcoming hers.  I had a great time making up the cool things she and her friends could do to defeat the bad guys.
4. While writing did your characters behave and do what you intended for them to do or did they go in their own direction?
A little of both.  I had the general idea of who they were and how they interacted, but sometimes they did go off on their own and created little side plots for themselves.  In the end, the all became the people I thought they would when I started the story.
5. Did you plot out the book or just hang onto the keyboard and see where it took you?  I had the plot in my head, but didn't do any outlines or anything like that.  I just started typing and kept going until it was finished.  Then, in the revision phase, I fleshed out some things, deleted others, and added some too.
6. Where can we find you on the web?
You can find me at Jacquelyncastle.com
Thanks for being here today, Jacquelyn!
Now for a little more on the book...
Blurb:
It has been said that dragonflies are symbolic of imminent change:

Here's where you can find it :
http://www.classactbooks.com/The-Dragonfly-Prophecy-by-Jacquelyn-Castle--Mobi_p_299.html