1. Who is Lizzy Ford, really?
I get asked this question a lot!  I’m basically just a normal (slightly overweight) woman with a love for writing and a somewhat freak of nature ability to write a new novel every month.  I live in Arizona with my husband and our three animals.  I view my books and success as the result of the incredible amount of support and feedback I receive from readers as well as a team effort: I work with a freelance book editor, freelance graphics artist, and my husband, who is an I.T. genius.
2. Where did you get your inspiration from for Damian’s Oracle?
Many of my books start out in my dreams, usually with an intensely emotional scene or just a straight out movie in my mind.  Damian’s Oracle was no different.  I dreamt the opening scene, where Sofi is trying to figure out what’s wrong with her.  Unknowingly, she’s transitioning from a human into an oracle, but she doesn’t know that yet, so the dream (and opening scene!) were intense.  She’s frustrated and convinced she’s dying, and no one can help her.
3.  Do you ever have problems with writers block?  If so how do you get through it?
Not yet.  I’ve never had an issue yet with writer’s block.  If anything, I have the opposite: too many ideas to keep up.  I dream stories and write fulltime – more like writer’s overload!
4. Damian’s Oracle is book I in the War of the Gods, what’s next?
Book two in the series, “Damian’s Assassin,” and book three, “Damian’s Immortal,” are both out as well.  I’ll release book four, “The Grey God,” in May.  I’m also planning to launch two spin-off series from this one with one starting next Summer.
My 2012 publishing line-up will consist of ten novels, a novella, and short stories as needed/requested for anthologies.  I’m getting ready to release my first young adult fantasy, too.
5. While working on a story, do you directly onto the computer or are there notebooks and plot ideas jotted down in various places?
Everything is in my head.  The only time I take notes is during revising, when I need to make sure I’ve caught all wandering subplots or standardized speech or other language essential to the world I’ve built.
6.  What do you do when you’re not writing/editing or thinking about writing/ editing?
I plan and run my business!  Being an indie writer is like being a business owner.  I’m fully responsible for marketing, advertising, building an online platform, managing the financial aspect, strategic (long term) planning, analyzing what’s working and not ... so writing and editing make up about 50% of what I do.  I normally designated 2 weeks a month to write and revise a book, then the rest of the time is spent networking, connecting with readers, researching marketing/advertising opportunities.  I love it – there’s always some new challenge!
7.  If you had one piece of advice for all those writers sitting out there procrastinating about making that first submission or taking that first publishing step, what would it be?
You’ll never succeed if you don’t take that first step, whether you go the traditional route or the indie route.  It takes a little bit of talent and a whole lot of will in this industry to make it.  I feel fortunate and grateful for how far I’ve come this year, but it took a team and it took every spare moment I had when I was working fulltime.  Now that I’m a fulltime writer, I’m still putting in 10-12 hour days and corresponding with readers and fans outside the time I designated for work.  I’ve wanted this since I was knee-high dreaming of becoming a writer, and I count my blessings daily that I’ve reached the point in my life where I can.  There are no bad days when you love what you’re doing.
8.  Please share your favourite scene with us from Damian’s Oracle.
I imagine it’s the scene where Sofi has transitioned from human to oracle but still doesn’t know what that entails.  She knows she’s different, and the feeling of being a freak among freaks hits home one evening while she’s watching the other immortals sit around and eat pizza.  She can’t eat, because she’s been blood bound, and all she can do is watch them, knowing she doesn’t fit into their world or the human world.  That feeling of utter loneliness was one I’ve had for much of my life, and I think everyone has gone through some stage of their lives where they felt like they were the only outsider in existence!
Thanks so much for taking the time to be here today, Lizzy!  J

Lizzy Ford is the hyper-prolific author of the "Rhyn Trilogy" and "War of Gods" series, both launched in 2011, as well as multiple single title young adult fantasy and paranormal romances. Lizzy's books have reached into the bestseller lists on both Amazon US and Amazon UK in multiple categories. Through her unconventional online marketing strategies, Lizzy has gone from selling 20 books in January 2011 to around 5000 books in September 2011 and from over 7,000 free downloads of her work in January 2011 to over 40,000 downloads in September 2011.


Lizzy is considered by most to be the ultimate writing freak of nature for her ability to write and epublish a new book every 30-45 days. She is also a regular contributor for the Curiosity Quills website and is an active member of a small guild of nine passionate, talented writers, the Indie Eclective. Lizzy's books are available from Amazon, BN, Smashwords, iBooks/iTunes, and all other eReader libraries.
Lizzy’s links:
·        FB: http://www.facebook.com/Lizzy
website: http://www.guerrillawordfare.com/
·        Twitter: http://twitter.com/#!/LizzyFord2010
·        GR: http://www.goodreads.com/author/show/4558309.Lizzy_Ford
·       Amazon: http://www.amazon.com/Lizzy-Ford/e/B004XTTYOC/ 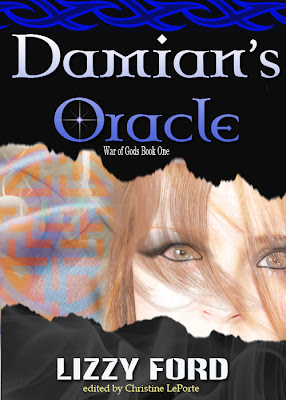 Inspired by Slavic mythology, Damian’s Oracle is the entree into the ongoing battle between good and evil over the fate of humanity. The White God, Damian, and his Guardians protect the world from the Black God and his monsters while rescuing Naturals – humans with extraordinary paranormal gifts – from the Black God, who would kill or convert them.


Caught in the middle is cool-headed Sofia, a Natural whose gift will tip the scales in the war. Sofia begins her transformation from human into oracle, the first in thousands of years. Damian rescues her from the Black God in time to complete a ceremony that will bind her to him for eternity. Sofia struggles with her new world and her role as an oracle and Damian’s mate while haunted by a mysterious man from Damian’s past who’s supposed to be dead. Unbeknownst to her, her link to the dead man may be all that saves Damian, his Guardians, and the fate of humanity.


While he wants nothing more than for the petite beauty to take her place at his side like the oracles of legend did his White God forefathers, Damian can’t quite rationalize having to win her over instead of command her. Further complicating his life is the sobering realization that there are spies in his organization who are helping the Black God take out his Guardians. Damian must help Sofia reach her potential fast, especially when a threat from his past returns.
Damian’s Oracle links: