The next part of After the Silence is available today! 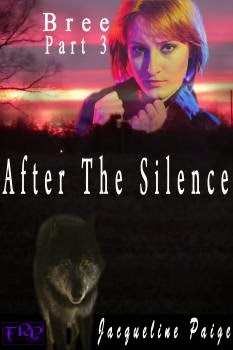 One woman’s journey through the chaotic new world.

Those left standing make the paths for the future generations.

Those the planet allowed to live still have to survive the trials of the virus. If you manage to come out of it alive you are left with some form of mutation that could give you an ability that could be harmless or lethal.

Bree Taylor is the last survivor of her family. With no other choice she sets off on her own to escape the clutches of the new government’s army—that does not place safety and security in their code of behavior only the highest bidder get their protection and loyalty.


The sound of wings flapping had my undivided attention; I stopped and held my breath trying to locate the direction it was coming from. The moment I honed in on the area the bird had been I wished I hadn’t. Here I was half way to the middle of the clearing in snow up past my knees and coming out of the trees roughly thirty feet from me were two very rough, huge men. I had twenty seconds grace before they spotted me, just enough time to turn in the snow and take the first step in what would likely end up being the most difficult run of my life.

Running in snow this deep was like running through water. If your feet didn’t clear it you got nowhere. I hadn’t stopped long enough to measure the height of the men quickly gaining on me, but I was fairly certain their long legs would move through this snow faster than my own.

As I hit the tree line again, I hesitated long enough to pick a direction. Kismet and I had been through this area enough times I knew most of it without thinking now. Slipping in the snow I changed directions and headed towards the hill that led to the river bed. If I could out-maneuver them in the densest part of the trees I might just be able to put a big enough gap between us that they’d give up.

Chancing a glance over my shoulder I noted one thing. They were large enough it would take four of me to make this anywhere near equal. My heart was thrumming, pumping blood through my veins in a chaotic beat. A part of me knew I couldn’t outrun them, but I had to try. Turning, I bolted back towards a tight grouping of trees. I could hear the pounding of their feet hitting the ground behind me and had one second to regret the one time I didn’t let Kismet come with me. He would have evened the odds.

One of them was close enough I could hear his heavy breathing over my own as I dodged between two trees I knew he wouldn’t be able to go through. My coat was actually slowing me down, but it held the knife and gun and there was no way I was dropping either of those right now. I heard him curse behind me and knew I only had seconds before he would have me. Ducking left, I stopped and spun around at the same time. My knife was now in my hand held down against my side as I gasped to settle my breathing. He stood a foot away from me and looked really pissed with the fact that I had made him run after me.

I wanted to look around for the other one, but didn’t dare take my eyes off of him. A familiar flick sound brought my attention to his hand to see a blade slide smoothly from the handle it had been folded into. There was nothing I could say that was going to change this man’s plans. His eyes were wide and bored into mine with a look of craziness. A branch snapping behind me was the only warning I got before a big arm wrapped around my waist and pulled me back into a hard chest.

They spoke to each other and it wasn’t in any language I understood, then again I only knew English. The tone the man in front of me used and the sudden smirk on his face told me I was in deep shit. There was no way, no how this was happening to me. I refused to be a victim. The one behind me tightened his hold, making breathing hard. He rubbed his face against my neck making my skin crawl. The other one waved the knife in front of me a few times and then used it to push open my coat. He grinned and said something to the one that was breathing on my neck.

The adrenaline was pumping so fast through my body I didn’t know how I was able to not vibrate. Now or never! Lowering my head, I relaxed my body as much as I could. Taking a deep breath, I threw my head back and brought my hand with the knife up at the same time, aiming for the arm around me. The loud crack and sudden pain in my head told me I’d connected hard with the face behind me. He cursed and let me go just as the other one lunged towards me. I felt the sting across my cheek as I brought the knife down and across his chest. He yelped.

What they're saying about the first part of Bree's story:

"Her journey is so interesting, I found myself unwilling to put this book down.  Jacqueline Paige has produced a well written story which has a beautiful blend of adventure and paranormal fantasy that readers will find themselves drawn into the pages.  I highly recommend this book to lovers of post apocalyptic/survivalist stories and I am anxiously awaiting the next book in this series!"

"Can't wait to read the next book.
This book is well written,the author definitely knows how to describe stuff..."

~ Reviewer for Paranormal Romance and Authors that Rock


"I really like the level of description,  I LOVE the development and personality of Tremor and Kizzy, and I really like where this book could go..."


"This first installment sets the scene and it' s a bit bleak. Hardships and danger are the order of the day, and for a woman out on her own it can be especially daunting. I did enjoy Bree's character, her attitude..."

"The ending left me wanting to read book 2 asap. I give this 5 awesome fangs and will definitely read the next book in the Bree saga."

Part 1 and 2 Also available on AMAZON and SMASHWORDS 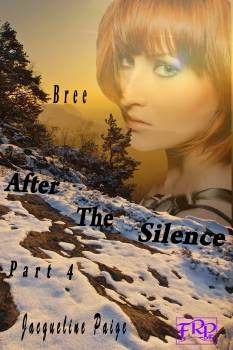 Stay tuned for Excerpt Thursdays - never before posted excerpts from all my books!