I love sharing new covers, it's my favorite part
of the publishing process (except the writing part).
Twice Cursed will be released by Whiskey Creek Press
in February!! 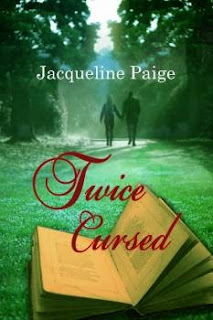 Blurb:
Maddy is the oldest witchling to ever attend the Hidden Cove Academy, having been cursed as a teen; she’s forced to have a solitary life outside of her own magical community.  With her magic so dangerously unpredictable, she rarely takes the chance on mixing with the general public.
From one harmless trip to a museum she finds herself spellbound yet again by an invisible boundary, caused by a three hundred year old curse, dictating that Maddy must stay close to the stunningly sexy Colin.
Being stuck with a tall, dark, incredibly lick-able stranger can’t be all that bad, right? Until they discover if they get too close the spirits bound with the curse will take over their bodies ... at the same time if they’re too far from one another the curse will kill them both.
Will the curse's secrets be unraveled in time or does certain death await them both?
I'll be sharing excerpts in the next few weeks.
Jacqueline Paige
http://jacqpaige.webs.com/
Posted by Jacqueline Paige at 4:02:00 PM