Today I have the pleasure of having Roxanne Rhoads here
discussing her latest release Paranormal Pleasures.


Roxanne will be giving away a copy of Paranormal Pleasures
in ebook format - so be sure to leave your email addy when
you comment!!

1.     1.  You are a very busy lady.  Tell us a bit about Roxanne Rhoads.
Busy may be an understatement. I am a workaholic in need of vacation. LOL.
In addition to writing paranormal fiction, I freelance write for several blogs and websites. I also promote and review books at Fang-tastic Books, write a column for Night Owl Book Lover’s Magazine, and occasionally review books for Night Owl Reviews.
I also own and operate the online book tour company, Bewitching Book Tours,  which specializes in paranormal and urban fantasy book tours.
And I’m also a book publicist for Entangled Publishing and occasionally do freelance PR for authors- currently Laura Bickle/Alayna Williams is one of my freelance PR clients.
Told you I am a workaholic. J
2.  Paranormal Pleasures is quite the amazing collection of stories.  Where do you get your inspiration from?
My muse is very eclectic. I never know when a story idea will pop up or new character will appear.
Sometimes a line from a song will spark an idea, sometimes a photograph or a painting. Sometimes ideas pop into my head when I’m thinking about something else- like making a grocery list- and all the sudden a story idea works its way in or maybe a character’s voice whispers in my ear.
I believe inspiration is everywhere; you just have to learn to listen to the strange little whispers that most people ignore.
3. Do you ever have problems with your characters doing what you wanted them to do?
Oh yeah. In a novel I recently finished (first of a series) I intended on one character to just be a side character, supporting cast. He wasn’t supposed to be a love interest for the heroine at all. Well, he had other ideas. Before I knew it there he was staking his claim and vying for her affection.  What started as regular, though troublesome, romance turned into a love triangle. At this point I’m writing book 2 and I don’t even know who will end up with the girl.
4. While working on a story, do you type directly onto the computer or are there notebooks and plot ideas jotted down in various places?
It’s a bit of both. I still do my best thinking with a pen in my hand so my notebooks are filled with ideas, character profiles, plot arcs, and so on. But usually when I am ready to actual add to the story and work within the text I sit down at the computer and type everything. It just became too tedious to write everything out longhand then type it all up.
5. What’s next for you, any future releases coming out soon?
I don’t have any dates right now but like I mentioned above, I recently completed the first book in a vampire/witch erotic romance series. I hope that will be coming out in the near future. I am working on book 2 of the series. I also have several paranormal erotic short stories and novellas in progress along with another novel, currently a stand alone and could probably be labeled as paranormal chicklit. One day I may find the time to finish up a couple of the waiting projects.
6. Who are three of your favourite authors?
Only 3? That’s hard I have a huge list- let’s see- Kim Harrison, Annette Blair, and Nicole Peeler are three right off the top of my head.
7.  What do you do when you’re not writing/editing/promoting or thinking about writing/editing/promoting?
You mean I’m supposed to have a life outside of words and books? J
I read every night- that’s my way to unwind. But that still involves books and words.
Outside of book… I love to garden. Right now is my big gardening season because everything has to get in the ground. I spent the last weekend getting bruised by yard equipment, bitten by bugs, blistered from hand tools and burned by the sun- all to get my seeds, seedlings, flowers, plants and Japanese Maple trees in the dirt before the season gets away from me. Once that’s done I just have to remember to water and weed until harvest time.
When it’s not outdoor weather- which would be like 9 months of the year here in Michigan, I love to craft, decorate and redecorate my house (even if only in my head or on my wishboards), and search for unique vintage and antique “treasures”.
8. This one has absolutely nothing to do with writing, but I’m getting ready for True Blood Season 4!  Bill or Eric?
Vampire wise Eric is so much sexier- but as far as True Blood goes I’m all for Alcide. Strange because I’m normally a vamp girl but in his case, Alicide’s just my type- tall, dark and rippling with muscles. So what it he turns furry…unless my allergy to dogs extends to werewolves- now that would suck. LOL.
Thanks so much for stopping by today, Roxanne!!!


Now, here's more about Paranormal Pleasures - a book you need to put on the top of your TBR list!! 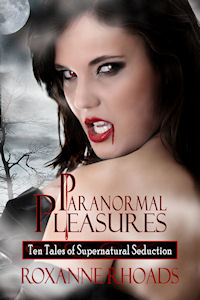 Step into the darkness and let these tales tempt and tease to satisfy your paranormal cravings.

Eight of Roxanne Rhoads' previous eBook publications appear in print for the first time, along with two brand new, never before published tales of supernatural love and lust.

New witch Marissa is learning the ropes of being one of The Others. One of her mentors is vampire Deirdre, a tall beauty who really irritates Marissa. Marissa is extremely pissed when she shows up to Dante's Ball and finds Deirdre there with Marissa's recent ex-boyfriend, Jeff. The one she was encouraged to break up with because of his humanity. Deirdre explains her reasons for bringing Jeff and offers to help Marissa say goodbye to him in a way none of them will ever forget

New witch Marissa is learning the ropes of being one of The Others. One of her mentors is vampire Deirdre, a tall beauty who really irritates Marissa. Marissa is extremely pissed when she shows up to Dante's Ball and finds Deirdre there with Marissa's recent ex-boyfriend, Jeff. The one she was encouraged to break up with because of his humanity. Deirdre explains her reasons for bringing Jeff and offers to help Marissa say goodbye to him in a way none of them will ever forget

Vanessa is tired of her boyfriend Simon’s promiscuous vampire ways and stakes him, repeatedly- not close enough to the heart to kill him but close enough to make it hurt. But now she’s had a change of heart and considers embracing the sexual world of the vampire instead of being jealous of it.

Witch in the Middle

Ariadne is a witch torn between two men, a vampire and a human. Her heart doesn’t want to choose but the men force her to make a decision that could break her heart, unless with the help of the Goddess all three of them can come to a mutually acceptable…and enjoyable agreement.

Devon’s witchy girlfriend becomes insatiable every time a storm rolls around and he’s more than happy to give her exactly what she needs.

Shannon’s never seen her vampire boyfriend, Logan, vamp out before. Then one night he has to kill to save her life. Can she ever look at him the same way again?

Elita, a pure blood witch, has come home to find who or what killed her parents and to take her rightful place as the head of the coven. After five years of investigating and exhausting all conventional methods at her disposal, she decides to do the one thing a good witch should never do—summon a demon. The demon is not what she expected. Elita is soon swept up in his power… and her own.

The residents of the sleepy little town of Flushing, Michigan had no idea a vampire lived among them, seducing and drinking from all the men in town. Renata walked among them, blending in, taking only what she needed. One night, while she was on the prowl for fresh blood at a carnival, a handsome carnie caught her eye. She had no way of knowing he was a vampire hunter and was there for her.

Liana made Nerissa a vampire centuries ago in the islands of Greece but she’s never tired of her companion or the way she hunts her prey.

A Halloween to Remember

What says Halloween better than a wild party at an old Victorian mansion complete with its own cemetery? Perhaps meeting the man of your dreams thanks to the magic of Halloween.

Adena can’t believe her eyes when she spots Dimitri in the library- he looks like something straight off the cover of a historical romance novel-the type of guy she’s always dreamed of. Too bad he disappears before she has the chance to introduce herself. When she finally spots him again later that night she decides she’s not letting him get away again. Adena thinks she’s finally found the one. Until she wakes up alone the next morning- in the cemetery.

Witching You A Merry Christmas

Witch Vicki has been leery of vampires ever since she was attacked five years ago. Daniel's a vampire and he's been secretly in love in with Vicki for two years ever since becoming Vicki's partner in The Guardians a supernatural group of paranormal crime fighters. Daniel loves Christmas and hopes the spirit of the holidays will soften Vicki's hatred of vampires and help her see him in a new light. Will he get his Christmas wish?
Print: https://www.createspace.com/3585032
Print at Amazon: http://www.amazon.com/gp/product/0615470386/ref=as_li_ss_tl?ie=UTF8&tag=roxannerhoads-20&linkCode=as2&camp=217145&creative=399349&creativeASIN=0615470386
Nook: http://search.barnesandnoble.com/Paranormal-Pleasures/Roxanne-Rhoads/e/2940012653772
Multiple ebook formats at Smashwords: http://www.smashwords.com/books/view/54836
All Romance Ebooks: http://www.allromanceebooks.com/product-paranormalpleasurestentalesofsupernaturalseduction-543577-139.html
Reviews:
“I felt the lust, I felt the chills, I felt the desire and of course I felt the spookiness. This story is set in my favorite time EVER - Halloween! And I do have to say that Ms. Rhoads definitely has a flare for the very hot side all the while keeping my interest piqued. This story definitely has all the elements of a hot erotic, spooky Halloween, and a love tale that will have the hopeless romantic fall in love all over again.”~A Halloween to Remember reviewed by Cecile Smith Night Owl Reviews