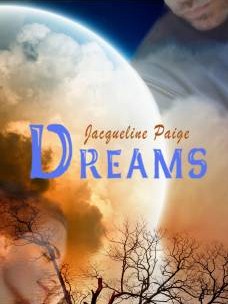 The Kindle version of Dreams is now up on Amazon.
The Print will be available in a few weeks (or sooner).
I'm so excited to have all three stories from A Dream
inside one cover.  After the first two, it felt like the
story wasn't complete, so the third story After the
Dream had to be written.
I'm taking a short three day holiday for a much needed rest after the summer madness and writing craze.  I'll be back on Monday and then I'll be giving away an e-copy of Dreams here on the blog.
A Dream series - three steamy tales of romance, suspense with unexpected paranormal flares
IN OUR DREAM:  She’s a small town cop.  He’s an inmate undercover.  They meet in a dream.
FROM A DREAM: She wakes up in a dark hole, alone.  He’ll stop at nothing to find her.
Brody believes he’s a normal man.  Tess has felt like a freak most of her life- except when she’s around one man.

Email ThisBlogThis!Share to TwitterShare to FacebookShare to Pinterest
Labels: After the Dream, Dreams, From A Dream, Give away, In Our Dream