Today I have the pleasure of interviewing Author of the
Deadtown series, Nancy Holzner on her promotional
tour for Deadstone.


At the end of the interview there will be a link to take
part in the giveaway Nancy is holding. 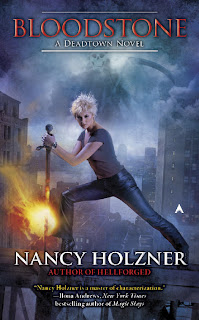 Boston’s diverse South End is known for its architecture and great restaurants, not its body count. So when mutilated human corpses begin turning up in the area, the entire city takes notice. The killer—dubbed the South End Reaper—uses a curved blade for his grisly work. And even though there’s no real evidence pointing to a paranormal culprit, the deaths are straining the already-tense relations between Boston’s human and inhuman residents.

As the bodies pile up, Vicky, her formidable aunt Mab, and her werewolf boyfriend Kane investigate, only to find that the creature behind the carnage is after something much more than blood…
http://nancyholzner.wordpress.com/
http://www.facebook.com/pages/Nancy-Holzner/163746834500
http://twitter.com/#!/NancyHolzner
Follow this link to enter the draw:
https://docs.google.com/spreadsheet/viewform?formkey=dEQ4akN0dkpkNmJRUFFmeFlUbk9rQmc6MQ
Posted by Jacqueline Paige at 4:30:00 AM

Email ThisBlogThis!Share to TwitterShare to FacebookShare to Pinterest
Labels: Give away, guest stop